A single mom and tortured musician find common ground in Scarlett Cole's REDEEMED, the second standalone romance about the band PRELOAD. Elliott “Pyro” Dawson has a past he's fought like hell to overcome and Kendalee Walker is at her wits end and homeless. Will Kendale provide the family Elliott has never had or will dangerous habits prove to strong? Readers will savor this dark, sexy rockstar romance.

We are excited to share with you the highly anticipated second installment of Scarlett Cole’s Preload series, ELLIOTT REDEEMED. Don't miss out on this smoking-hot rockstar romance! Follow along with the tour for excerpts, guest posts, reviews, and a chance to win a Preload Bundle! 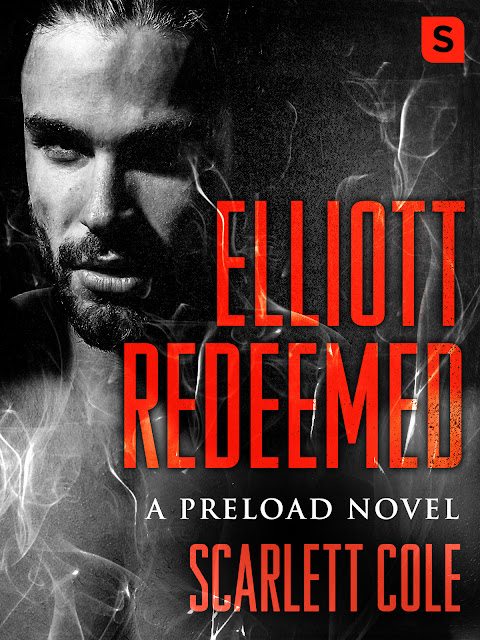 Synopsis:
A single mom and tortured musician find common ground in Scarlett Cole's Elliott Redeemed, the second standalone romance about the band Preload.
Elliott “Pyro” Dawson burns up the lead guitar like a legend. But the nickname Pyro isn’t just a clever play on words. It’s much darker. A past he's fought like hell to overcome.
Grocery store cashier Kendalee Walker is at her wits end and homeless. She's watched her fourteen-year-old son, Daniel, go so far off the rails, he can no longer see the tracks.
When the two are brought together, attraction flares, but can Elliott find the family he never had with the sexy woman and her son, or will he fall back on dangerous habits?

He lay down on the bed and pulled her into his arms before tugging the bedding over the two of them. It was a little damp in places because of all their ice play, and he smiled at the reminder. “What I am into is finding out what the person I’m with wants to try. I’m into good old missionary on a Sunday morning when I’m hungover and just want to get off. I’m into sex in a field while hiking or on the deck of my cottage. Some days, I’m into trying a hundred different positions before getting off. I’m into cuffs and toys and exploring. I’m not into being called Sir, or hurting someone, or expecting submission. I just want to explore, and I want to find someone who wants to do that with me.”
“Hmm.”
“Hmm? What are you into?” he asked, kissing her forehead.
“It would appear to be you. I’m into you, Elliott. And missionary position. And outdoor sex. And a hundred positions. And I’d really like to figure out whether a reverse cowgirl is really a thing.”
Elliott barked out a laugh. “Reverse cowgirl?”
Kendalee chuckled. “Yeah. Like . . . your . . . you know . . . it doesn’t naturally bend that way, right?”
“Oh Lord, woman. It’s got quite the range of movement, but next up, we’re going reverse cowgirl.”
They lay in silence, and Elliott clicked off the light.
“Elliott?”
“Yeah, Lee.”
“Don’t make me fall in love with you. I’m not sure my heart is quite ready for it yet.”
His own heart skipped a beat at her declaration.
Because it meant she was thinking about it. About him, that way.
“Can’t help you with that one, honey. It’s probably the only thing I can’t do for you.”
Kendalee sighed against him, burrowing closer into his side. “Thought so.”
Elliott smiled as he closed his eyes and drifted off to sleep.

The tattoo across my right hip says it all really. A Life Less Ordinary. Inked by the amazingly talented Luke Wessman at the Wooster Street Social Club (a.k.a. New York Ink). Why is it important? Well, it sums up my view on life. That we should all aspire to live a life that is less boring, less predictable. Be bold, and do something amazing. I’ve made some crazy choices. I’ve been a car maker, a consultant, and even a senior executive at a large retailer running strategy. Born in England, spent time in the U.S. and Japan, before ending up in Canada were I met my own, personal hero – all six and a half feet of him. Both of us are scorpios! Yeah, I know! Should have checked the astrological signs earlier, but somehow it works for us. We have two amazing kids, who I either could never part with or could easily be convinced to sell on e-bay.
I’ve wanted to be a writer for a really long time. Check through my office cupboards or my computer and you’ll find half written stories and character descriptions everywhere. Now I'm getting the chance to follow that dream.
Connect with Scarlett: Website | Facebook | Instagram | Twitter