USA Today bestselling author Eliza Knight delivers the next book in her tantalizing MacDougall Legacy series. LAIRD OF DARKNESS features a woman abandoned, a Highlander starting a revolution, and the love that brews in a tumultuous time…

About Laird of Darkness: 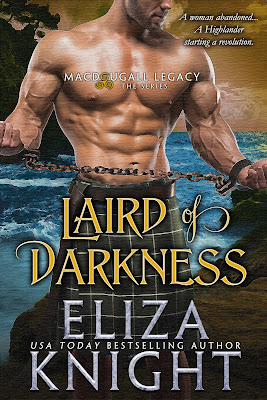 When Lady Rosamond de Warenne is abandoned by her father in a remote cave, she doesn’t believe her fate could get any worse—until she’s taken by a fearsome Highlander.

Laird Tierney MacDougall, recently released from imprisonment by the English, is bent on revenge, starting with marrying the daughter of his tormenter. A union forged from vengeance is doomed to fail—or is it?

An excerpt from LAIRD OF DARKNESS
Copyright © Eliza Knight 2017

Slowly he backed away, nodding. Without a backward glance, and ignoring the shouts from Simpson naming him a traitor, Tierney walked the planks between the ships until he stood beside Samuel once more.
The grappling hooks were removed, sails were raised, and the rowers were put to rowing. Wind tunneled through his hair. The two ships soon became dots on the horizon, the twinkling of their lanterns slowly disappearing.
All he could think of was Rosamond.
He descended the stairs and marched toward the cabin. Fist to the door, he demanded she open it.
A second later, she stood before him, eyes wide, mouth agape, taking in the splatters of blood on his shirt.
“You’re alive,” she murmured, and then threw herself into his arms.
Without hesitation, Tierney wrapped her in his embrace, letting the warmth of her supple body sink into his and feeling the familiar rush of desire pummel him once again.
“What of the pirates? Is my father dead?”
“He was not aboard the ship. I left the English in the pirates’ hands.”
“They are letting us go?”
“The pirates, aye. The English have no choice.”
Her hands splayed over his back massaging the sore muscles he’d worked so hard.
“Thank God,” she murmured.
“He has nothing to do with this.” Tierney caught her gaze. “Nor this.” The very thing he’d wanted to do since first looking at her ruby lips had been to kiss her. And he denied himself no longer.
There was no tentative brush of lips, or even a gentle caress that would ease her into his kiss, but a hard, ferocious crush of his mouth to hers. Claiming her. Letting the rush of battle be replaced by the pulse of his craving.
The power behind his kiss startled him, and he fully expected her to shove at him, to rail against him for taking such liberties, but the lass only clung to him more. Sighed against his mouth, opened her lips for his invading tongue. 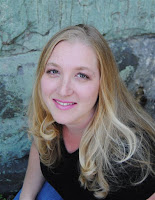 Eliza Knight is an award-winning and USA Today bestselling author of over fifty sizzling historical, time-travel and contemporary romance novels. Under the name E. Knight, she pens rip-your- heart-out historical fiction. While not reading, writing or researching for her latest book, she chases after her three children. In her spare time (if there is such a thing…) she likes daydreaming, wine-tasting, traveling, hiking, staring at the stars, watching movies, shopping and visiting with family and friends. She lives atop a small mountain with her own knight in shining armor, three princesses and two very naughty puppies.
Connect with Eliza at: Website | Facebook | Twitter | GoodReads | Instagram