Guilt is the hardest habit to kick.
Follow the reveal and enter to #win $25.00 Amazon Gift Card!
Enter at: http://www.rafflecopter.com/rafl/display/b050ef29378/? 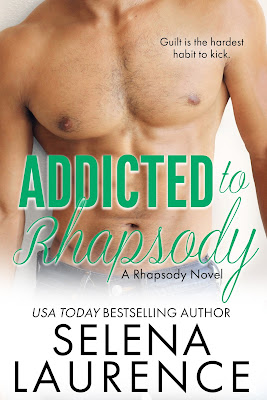 Blurb:
Guilt is the hardest habit to kick.
Garrett Jakes is the sexy and sex-addicted lead singer of Rhapsody. Now in recovery, trying to clean up his act and atone for his mistakes, he's decided to stay in Portland, Oregon where he went to rehab, and more importantly, where his bandmate's sister-in-law lives. The only problem is, he can't stop the guilt he feels whenever he looks at Savvy, and he's not sure if he's helping or hurting when he sticks to her like glue.

Savvy O'Roark is a widow and a mom at twenty-eight. She watched as her husband was murdered in their pub one night while he fought to protect her. Now she's alone with her young son, struggling to keep her husband's business and his memory alive. The only problem is, she can't stop the guilt she feels whenever she looks at her brother-in-law's bandmate, and she's not sure if Garrett's helping or hurting when he stays in Portland, in her bar, and in her life.

As Savvy and Garrett struggle to overcome their demons, they must also face the one thing neither of them can take back, while learning how to honor and forgive, love and let go. Can something that started in the wrong end up so right? Or will guilt be the one habit they simply can't kick?

Selena Laurence is a USA Today Bestselling author who loves Putting the Heat in Happily Ever After. In 2014 she was awarded the Reader’s Crown Award for Contemporary Romance of the Year. In 2015 her rock star romance A Lush Betrayal was a finalist in three national contests. Selena lives in the foothills of the Rocky Mountains with her kids, Mr. L, “Goldendoodle” and “Demon Cat.” When she’s not writing she can be found at soccer games and tennis matches, or one of her favorite coffee shops.
You can connect with her online at: Website | Facebook | Twitter | Amazon | BookBub | Goodreads