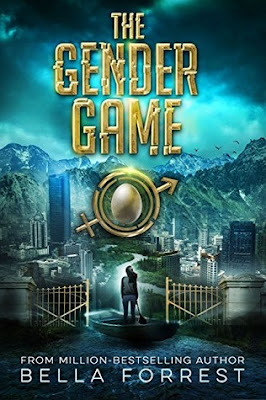 Welcome to the lands of Matrus and Patrus.

Ever since the disappearance of her beloved younger brother, Violet's life has been consumed by an anger she struggles to control. Already a prisoner to her own nation, now she has been sentenced to death for her crimes.

But one decision could save her life.

To enter the kingdom of Patrus, where men rule and women submit.

Everything about the patriarchy is dangerous for a rebellious girl like Violet. She cannot break the rules if she wishes to stay alive.

But abiding by rules has never been Violet's strong suit.

When she's thrust into more danger than she could have ever predicted, Violet is forced to sacrifice many things in the forbidden kingdom ... including forbidden love.

In a world divided by gender, only the strongest survive...

The Gender Game by Bella Forrest is the first book I've read by this author. I've heard about her A Shade of Vampire series but haven't had the chance to venture there. The book cover for The Gender Game really captures my attention and it absolutely matches its genre of YA / Dyspotian.

This book is set in the future of what used to be USA, where the land is divided into two: Matrus and Patrus which are separated by the Veil River, a toxic river that many couples come to commit suicide.

Violet is our protagonist and she was born and raised in Matrus alongside her brother Tim. After their mother died, they were orphaned. Boys in Matrus have to go through a screening test to find out whether they are fit for the Matrian society. Unfortunately Violet's brother Tim failed the test and they had to be separated.

After Violet became separated from her brother, she become more violent and landed herself in trouble more often than not. She went from one detention centre to another, just living her days out aimlessly but at the same time, taking an interest in self-defense and being one of the top student in her class in self-defense.

Violet did something bad and instead of being punished for it, an opportunity arises where she could free of her pointless life while getting re-integrated into society. She was to take on a mission at Patrus. She's never crossed the river before, but anything is better than getting punished for what she did isn't it?

At Patrus she is to "marry" someone called Lee, who's secretly working for Matrus. Together they are to carry out the mission together and in the same time frame it on someone called Viggo, who is a native to Patrus.

There is plenty of action in this book, and lots of topics and themes typical in a dystopian story. As expected, not everything went according to plan, and there's plenty of cliffhangers at the end of this book that just leaves you wanting more and counting down to the next book! I thoroughly enjoyed The Gender Game and cannot recommend this highly enough.

Goodreads link to The Gender Game