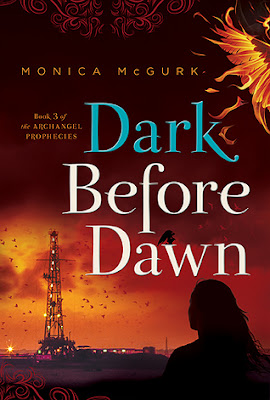 It’s darkest before the dawn . . . and that can be very dark indeed.

Twelve years have passed since Hope Carmichael helped fulfill the ancient prophecy that permitted the Fallen Angels to return, forgiven, to Heaven. Now a lawyer at twenty-eight, Hope—along with a resurrected Michael, the archangel who loves her—has been presented by Heaven with a choice: one that could either result in Hope never seeing her family again, or the world losing its greatest angelic protector. At the same time, Hope’s young sister Aurora struggles to help a school friend resolve her dark personal issues, all while being observed by a sinister adversary from Hope’s past, working on a plan for revenge that may soon plunge the entire extended Carmichael family into tragedy.

The culmination of the saga begun in Dark Hope and continued in Dark Rising, Dark Before Dawn returns to the world of the Archangel Prophecies, telling one final story of adventure, moral urgency, and the ultimate choice Hope and Michael make between the human and the divine.

Dark Before Dawn by Monica McGurk is the final book of the Archangel Prophecies.

In the two years after the ending to Dark Rising, Michael has been missing from Hope's life. She never gave up, searching everywhere for him. Just as she was giving up, Michael reappeared in her life.

Fast forward 10 years (12 years from the end of Dark Rising), Hope is a lawyer and her baby sister Rorie is now a teenager. Michael is a constant in their lives but he is getting impatient and has been pushing Hope to make a life-changing decision.

Lucas has been released from his punishment for his part at the end of Dark Rising, and he's once again seeking revenge on Hope and Michael. This time Lucas targets Rorie and her friend Macey.

I find there were some difficult scenes to read involving Rorie and Macey, but this series has a common theme in all 3 books and that is sex trafficking. This author is very brave to tackle this theme and has interwoven this cleverly in these books.

I was also very frustrated with Hope and her indecision regarding Michael and her inability to trust him. It is evident that they love each other, so why was there such a barrier between them? However, in the end we get a happy ending and I'm very glad this book has ended the way it has.

Goodreads link to Dark Before Dawn