All your rock stars in one hot box set for just 99cents!

Follow the blast and enter to #win
Enter at: http://www.rafflecopter.com/rafl/display/b050ef29432/? 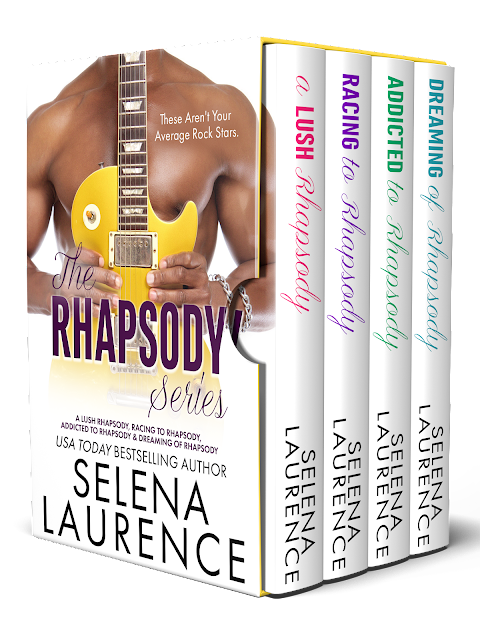 Title: The Rhapsody Series Box Set
Author: Selena Laurence
Series: Rhapsody
Genre: Contemporary Rockstar Romance
Release Date: September 2, 2017
Blurb:
The complete Rhapsody rock star series, including three novels and one novella.
A LUSH RHAPSODY:
Romeo...Meet Juliet.
She's Everything That's Lush.
He's the Rhapsody She Can't Resist.
It's a Battle of the Bands.
And There Can Only Be One Winner.

RACING TO RHAPSODY
He wants her last race to be to him.
She's Racing.
He's Waiting.
Two Hearts Collide in this opposites attract romance.

ADDICTED TO RHAPSODY
Guilt is the hardest habit to kick.
He has a sex addiction.
She's a widow at twenty-eight.
Can something that started all wrong end up right? Or will guilt be a habit they simply can't kick?

Pick up your copy at: Amazon | iBooks | Kobo

Selena Laurence is a USA Today Bestselling author who loves Putting the Heat in Happily Ever After. In 2014 she was awarded the Reader’s Crown Award for Contemporary Romance of the Year. In 2015 her rock star romance A Lush Betrayal was a finalist in three national contests. Selena lives in the foothills of the Rocky Mountains with her kids, Mr. L, “Goldendoodle” and “Demon Cat.” When she’s not writing she can be found at soccer games and tennis matches, or one of her favorite coffee shops.
You can connect with her online at: Website | Facebook | Twitter | Amazon | BookBub | Goodreads
Posted by Fiona at 12:00:00