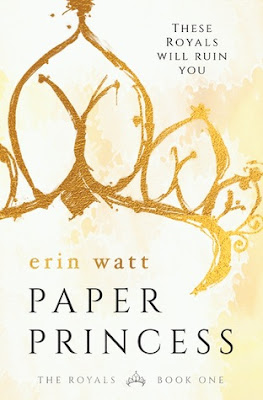 From strip clubs and truck stops to southern coast mansions and prep schools, one girl tries to stay true to herself.

Ella Harper is a survivor—a pragmatic optimist. She’s spent her whole life moving from town to town with her flighty mother, struggling to make ends meet and believing that someday she’ll climb out of the gutter. After her mother’s death, Ella is truly alone.

Until Callum Royal appears, plucking Ella out of poverty and tossing her into his posh mansion among his five sons who all hate her. Each Royal boy is more magnetic than the last, but none as captivating as Reed Royal, the boy who is determined to send her back to the slums she came from.

Reed doesn’t want her. He says she doesn’t belong with the Royals.

Wealth. Excess. Deception. It’s like nothing Ella has ever experienced, and if she’s going to survive her time in the Royal palace, she’ll need to learn to issue her own Royal decrees.

My oh my... this was brilliant! Never expected Paper Princess to be sooooo good!

Ella is only seventeen but she's been through so much in her life, having just lost her mom to cancer, she's had to take up multiple jobs (including stripping) to keep a roof over her head.

All of a sudden Callum Royal appeared in her life, claiming to be her legal guardian and whisking her off to the Royal "palace". Callum and Ella's dad Steve were best buddies (Ella had never ever met Steve) but Steve tragically died in an accident.

Callum has 5 sons including the hottest guy on the planet Reed Royal, who also happens to hate Ella so much that he's put on a "Royal decree" at their school that no one was to befriend Ella. Ella's fine with that, she's only here to get through her education and earn her place at college. Never ever was there so much tension between Ella and Reed and it led things to go awry.

And my... that ending was a cliffhanger of an ending! As cliffhangers go, I'd say that must've been the cliffhanger of the year! It totally makes you want to read Broken Prince (the next book) straight away!