Book review - Blood in the Water by Tash McAdam 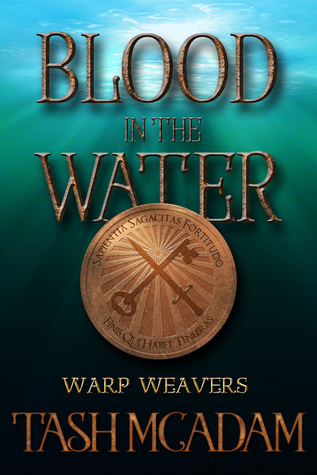 There have always been warps—tears between realities—and they’ve always been a threat to humanity. Most people are blind to them. But Hallie’s eyes are opening. Now that she’s going to school at the Protectorate, she’s learning there’s more to life than fun and games.

The truth is, she’s just become part of Earth’s only shield against the monsters of the warps. Before, she didn’t think she was anything special. Now, yanked from her relatively normal life, she realizes that she doesn’t have a choice.

When the emergency alarm sounds, calling everyone in the school to arms, even the young and inexperienced are needed. As one of the warp weavers—capable of closing the warps and stopping the monsters—Hallie must now work to save lives. And she must do it in the most complicated situation she’s ever experienced. Because there are sea serpents in the Thames, and Hallie has to close the doors that are letting them in.

The problem is, they’re underwater, and they’re hungry.

Now everyone is relying on her, and Hallie must find a way to do her job—with a brand new partner—before it’s too late. Because if she fails she’ll die, along with everyone who’s depending on her.

Blood in the Water is a prequel to the Warp Weavers series.

Hallie is an ordinary teenager until she's called to join the Protectorate which is a mystical school for warriors, warlocks and weavers. She's a weaver who has the power to open and close doors between dimensions. She's responsible for sealing up breaches to keep demons out from this world.

She's only been at the Protectorate for about a month or so before an emergency alarm sounded at the school, calling the help of everyone including the newbies who has had next to no experience.

So far she's only closed 4 breaches, 2 of them were training ones. She's completely clueless as to what they're dealing with and what she needed to do. She was sent to a team of experienced warriors and warlocks, her being the only weaver in the group.

Hallie partnered with an experienced warrior Ruble and they entered the river Thames in London, heading straight into a pool of sea serpents while looking for breaches to seal.

Overall, this was a fast-paced and exciting read and a brilliant introduction to the Warp Weavers series.

Blood in the Water is the second title I've read by Tash McAdam and I look forward to many more!

Goodreads link to Blood in the Water