A bride... A soldier… An arranged marriage. Can Lisa and Jeff take a chance on something real this holiday season?
Follow the blast and enter to #win
Enter at: http://www.rafflecopter.com/rafl/display/b050ef29443/? 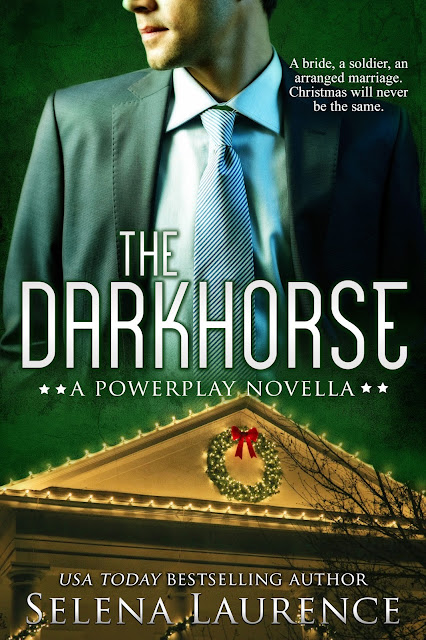 Title: The Darkhorse
Author: Selena Laurence
Series: A Powerplay Novella
Genre: Contemporary Holiday Romance
Release Date: November 7, 2017
Blurb:
A bride.
Lisa Scotch is done with men. And especially military men like her ex who left her with three lifetimes worth of debt and disappeared. But one day a new soldier walks into the school where she teaches, and he wants to make her debt disappear like her ex did.

A soldier.
Colonel Jefferson Thibedeaux is one of the most powerful men in the Pentagon. Raised without family or money, Jeff found both when he started his military career. Now there's a promotion that he wants and he can only get it if he has a wife. When he goes to speak at an elementary school, Jeff sees the answer to his dilemma in one very sexy school teacher.

An arranged marriage.
Jeff's proposal is all business. He gets a promotion, and Lisa gets out of debt. It's a one year arrangement that doesn't include some of marriage's more traditional...amenities. But when Lisa moves into Jeff's house, and the holidays roll around, the fireplace isn't the only thing heating up. As their attraction burns brighter than their Christmas lights, can Lisa and Jeff find something real in what was supposed to be pretend? Will the bride take a chance on another soldier? Can the soldier be the man his bride deserves? One thing's for certain, Christmas will never be the same again.

Add to your shelf on Goodreads
Pick up your copy at: Amazon | iBooks | Kobo | Nook

More from the Powerplay series:

Selena Laurence is an award-winning and USA TODAY bestselling author who loves Putting the Heat in Happily Ever After. Her super sexy stories take place everywhere from rock concerts to family ranches, and her books can be found around the world in four languages, at libraries, bookstores, online, and in audio.

Selena lives in the foothills of the Rocky Mountains where she can often be found at a local coffee shop, hiking the trails, or watching soccer. At home Mr L, her kids, “goldendoodle” and “demoncat” keep her busy trying to corral chaos. A veteran Indie author, Selena also coaches writers through her blog and workshops on turning #Passion2Profession.