First look - The Lord Meets His Lady by Gina Conkle

Can the scoundrel second son, Lord Marcus Bowles, and Genevieve Turner, a woman of ill-repute, find happiness? Or will his roguish ways and her dark past forever tear them apart? Fans of Tessa Dare’s Twice Tempted by a Rogue will love this sensual read releasing December 2017 from Sourcebooks Casablanca.

Gina is offering one (1) lucky winner an Amazon Echo Dot! To enter, simply fill out the Rafflecopter below:

About The Lord Meets His Lady: 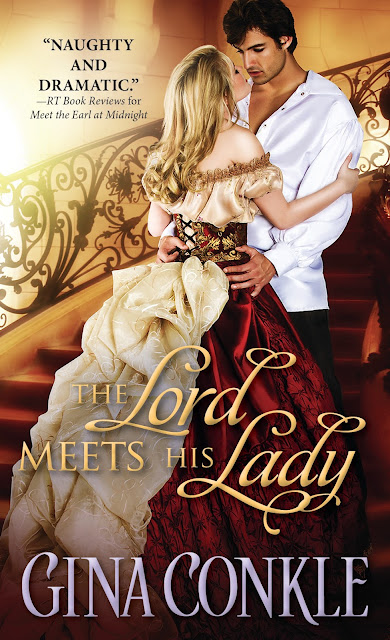 Lord Marcus Bowles has stained his family's reputation for the last time. Only after spending a scandal-free year restoring some far-flung property can this second son return in good graces. But Marcus isn't one to abandon a lone damsel on a dark country lane.

One stolen kiss and Genevieve Turner's handsome midnight savior disappears. Typical. No matter, Gen is finally on the way to her new post, and hopefully to finding her grandmother as well. Instead she finds her mischievous hero is her new employer. Surely a few more kisses won't hurt...

He grabbed the papers, getting an eyeful of his housekeeper. Fresh arousal stiffened his cock. Tiny moisture beads clung to her breasts, shining like diamonds on ample cleavage. Her shift’s white tie dangled over her bodice, begging to be pulled.
If he wasn’t careful, he’d press his mouth to hers and cry defeat.
His hips shifted, sloshing water in the tub. “The thing is what we have is like a game of Fox and Geese. Are you familiar with the board game?”
A sweet laugh erupted. “Fox and Geese? Yes, I’ve seen it. Pray tell, what do you mean?”
“Well, I’m the fox, outnumbered and outflanked by you.”
“Because of this morning.”
His gaze dipped to her pretty bosom. He was the worst kind of wastrel; everyone expected it of him.
Why not give in?
Sweat trickled down his temple, owing nothing to the hot bath. Miss Turner had to know he’d be putty in her hands if she crooked her finger at him.
“I’m not skilled with household matters.” He forced himself to look higher.
Dark lashes fringed her patient, knowing eyes.
He grinned aware he was caught ogling her. “You got the best of me, going on attack at the crack of dawn, no less. Very unsporting of you.”
“It was well past dawn,” she corrected. “But do go on. This is quite interesting.”
Her chin rested in her hand. She was close enough he could count the freckles on her nose. Miss Turner was pretty but not in the conventional sense. Her jaw was too square, her eyes too dark, and her stature tall for most men, but her body housed a soul older than her years and he wanted to lose himself in her.
Fighting for clarity, he tapped the folded papers. “I have here something to even things out. A negotiation piece.”
“In our game of Fox and Geese.” Her voice dipped with humor. “And here I thought we were all about cleaning up your unsightly cottage.”
“A minor detail. Life is about the dance between men and women.”
“A vicar’s wisdom, I’m sure.”
Firelight illuminated Miss Turner’s hair, the effect like honeyed threads. Desire shocked his system again, the jolt reaching between his legs. A medieval device could be slowly crushing him for all the sweet torture. He was ten times a fool for conversing with her while in his bath.
His vision glazed over all because messy hair and freckles entranced him. The current circumstances defined purgatory—him naked with a desirable woman he could never, should never touch.
“About that negotiation piece.” She nodded at the broadsheet.
He blinked, willing the intense wave between his legs to subside.
“I have a prime item, but it will come at a price.”
Miss Turner stilled and her eyes narrowed. “Go on.”
“I’ve something inside for you, but I think it’s worth having my chamber pot cleaned all winter.”
“What?” She balked. “You want…chamber pots cleaned. Not a service of another kind?”

Copyright © 2017 The Lord Meets His Lady by Gina Conkle

Other Books in the Midnight Meetings series: 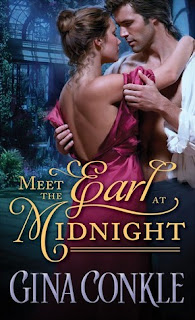 Meet the Earl at Midnight

It's going to take a Beast to tame this Beauty

Enigma Earl. The Phantom of London. That's what the gossip pages call Lord Edward Greenwich, a mysterious nobleman who doesn't show his face in London Society. With a reputation like that, no wonder Lydia Montgomery is horrified to be dragged from bed and packed off to live with him to save her mother from penury.

While Lydia has received all of the training a lady should endure, she's decidedly un-ladylike. She despises her corset and isn't interested in marriage. She'd prefer to remain unmarried and spend her time improving her art. But if she wants a chance at happiness, she'll have to set aside her fear of the earl and discover the man hiding behind the beast.

Will Edward and Lydia's greatest discovery be each other before time runs out? 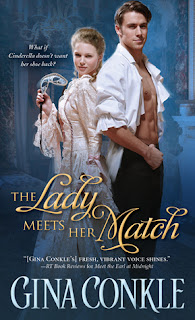 The Lady Meets Her Match

Locating Her Is Only Half The Battle...

Cyrus Ryland didn't become England's wealthiest bachelor by being a pushover, but the mysterious beauty he discovers sneaking around at his grand ball enflames his curiosity. When the clock chimes midnight, and she's nowhere to be found, Cyrus vows to scour all of London to uncover who she is. Little does he know that not only does Claire Mayhew not want to be found, but she wants nothing to do with him at all... 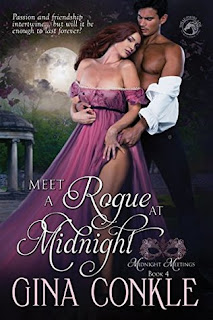 Meet the Rogue at Midnight

Jonas Bacon Braithwaite wants to make peace with his grandfather before departing England. Once Nottinghamshire’s favorite trouble-maker, he’s since become an upstanding man of honor. But, the lushly curved thief hiding in his bedchamber makes him think twice about one last conquest.

Livvy Halsey bristles at life’s rules. Always has. Sneaking into the Braithwaite house to reclaim a treasured family heirloom is one way she upends the conventional life that awaits her. Duty demands she marry. But what harm is there in having a little fun with her childhood friend before the Twelfth Night ends?

Gina Conkle writes lush Viking romance and sensual Georgian romance. Her books always offer a fresh, addictive spin on the genre with the witty banter and sexual tension that readers crave. She grew up in southern California and despite all that sunshine, Gina loves books over beaches and stone castles over sand castles. Now she lives in Michigan with her favorite alpha male, Brian, and their two sons where she’s known to occasionally garden and cook.