A rock star in recovery and a young widow with a child struggle to leave the past behind as they discover love can still be a part of their future.
Follow the release and enter to #win one set of paperback copies of the Rock Star Romance series that started it all – Lush!
Enter at: http://www.rafflecopter.com/rafl/display/b050ef29390/? 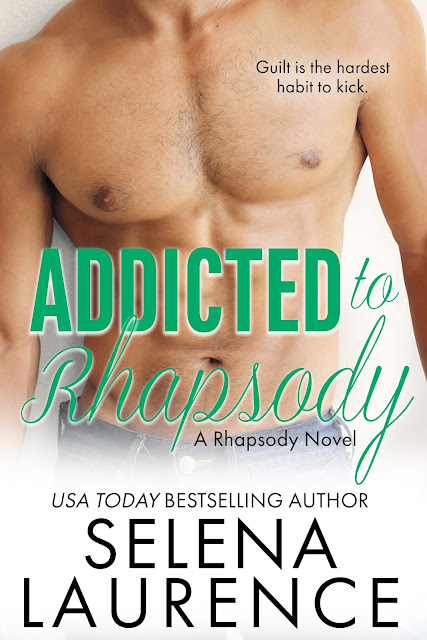 Title: Addicted to Rhapsody
Author: Selena Laurence
Series: Rhapsody #4
Genre: Contemporary Rockstar Romance
Release Date: July 24, 2017
Blurb:
Guilt is the hardest habit to kick.
Garrett Jakes is the sexy and sex-addicted lead singer of Rhapsody. Now in recovery, he's trying to clean up his act and atone for his mistakes. The only problem is he can't stop the guilt he feels whenever he looks at his friend Savvy. They have history, and he's not sure if he's helping or hurting when he tries to become a bigger part of her life.

Savvy O'Roark is a widow and a mom at twenty-eight. She watched as her husband was murdered while trying to protect her. Now she's struggling to keep her husband's business and his memory alive, and Garrett wants to help. The only problem is she can't stop the guilt she feels whenever she looks at him. Their history is one that haunts her, and she's not sure that's something she can ever get past.

As Savvy and Garrett struggle to overcome their demons, they must also face the one thing neither of them can ever take back. Will they learn how to honor and forgive, but also love and let go? Can something that started all wrong end up right? Or will guilt be a habit they simply can't kick?
Add to Goodreads

Excerpt:
He smiles softly. “You were supposed to be gone more than two days. But you don’t listen very well.”

I can’t help but chuckle at that. Kevin used to say the same thing. I guess I’ll have to accept the critique. “You haven’t broken anything, you’ve made it better.”

He wraps an arm around my shoulders, placing a gentle kiss in my hair. It makes me so warm inside I feel like I might be glowing. Then he leads me back toward the kitchen.

“And I’m not going to break anything. I’m going to make it all better, and you’re going to relax and trust me.” Then he stops, and turns me to face him, his hands still on my shoulders. He bends his knees slightly so he can look me in the eye. “I realize given who I am, and how we started, trust might seem like the last thing you should grant me. But you have to know I’ve never lied to you, not at the beginning, and not since. I will get this right, Savannah Scott.”

I nod easily, because it’s true. Garrett’s never been anything but honest with me, and he’s never failed me. In fact, I didn’t want to admit it, but he’s been right here saving my ass ever since Kevin died.

He smiles, pulling me into a hug that doesn’t last anywhere near long enough. “Good. Then do as you were instructed, and take a few more days away. Keep Ty home from preschool, go to the zoo, bake cookies together, have lunch and drinks with Tully. Take long hot baths, or get your nails done or paint the bathroom, whatever turns you on, Savvy. Have a staycation. Don’t do anything you don’t want to. Don’t do anything you won’t enjoy. Don’t do anything for anyone but you and Ty.”

I gaze up at him and my heart races in an entirely different way than it did when I saw the plaque for Kevin. I almost can’t form words, because what I see in his face is so tender and strong all at the same time, it’s scary and overwhelming. And it’s also familiar, because another man looked at me that way once, and it feels wrong to let anyone else do it now.

But as if he knows it’s confusing me, Garrett shuts down the emotions, closes off something inside of him, and he’s back to a smiling, helpful friend.

“So off with you now, lass,” he says in a terrible Irish accent. He steers me into the kitchen and all the way to the backdoor. “Don’t call us, we’ll call you, right?” he asks as he opens the door.

He gives me a gentle push outside. “Oh, you’re wanted,” he says. “Just not here for a while.” Then he slaps me on the ass, laughs like a maniac, and slams the door behind me.

As I walk to my car, that strange feeling of lightness that I’ve had off and on the last two days returns. And I have to admit to myself that it’s not Ty or Tully, or the bar that’s giving it to me, it’s Garrett Jakes.