In this thrilling hot must read by Amazon Bestseller Anna del Mar, Ex-SEAL turned game warden, Matthias Hawking is engaged in a fierce battle to end poaching in Africa, but when a beautiful journalist defies the poachers, he will do everything in his power to protect the woman who has captured his heart.

Anna is offering one (1) lucky Grand Prize winner a $25 Amazon Gift Card and three (3) Runner-Up winners with an eCopy of one of her Backlist Titles (winner’s choice)! To enter, simply fill out the Rafflecopter below: 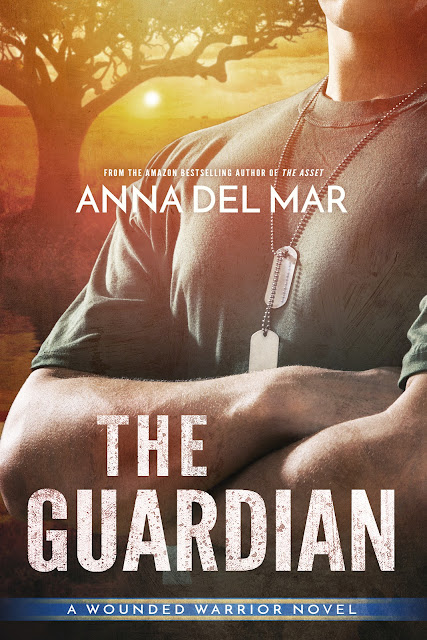 Game Warden Matthias Hawking is a decorated ex-SEAL engaged in a grueling fight against ruthless poachers in Africa. He’s short on resources and long on enemies. There’s a price on his head. The last thing he needs is the unexpected arrival of a beautiful but stubborn journalist threatening to uncover his secrets, an alpha female challenging his alpha male and getting into trouble, a hurricane wearing boots.

Jade Romo is a veteran of several different kinds of war. She’s survived her heroin-addicted mother, the foster care system, and the conflict in Afghanistan. Jade’s tough, confident, cynical, and self-reliant, a woman who doesn’t believe in forevers. But when she defies the poachers and lands at the top of the warlord’s kill list, she’s forced to rely on the skilled, attractive but supremely infuriating game warden who has captivated her body’s undivided attention.

Haunted by his past but driven by his courage, her mysterious guardian will do everything in his power to protect the woman who has captured his heart.

The moment our lips met my heart struck my breastbone with a sonic boom. Every molecule in me came online. It was as if my body had been on an extended blackout and suddenly a generator had kicked in, a massive voltage surge. A switch flipped inside of me and I went from off to on, from zero to a hundred.
The kiss marked the difference between before and now, activating my will to live beyond existence’s basic functions. I was no longer breathing for the sake of surviving, but rather getting high on the heady scent of Jade, gorging on her exotic flavors, getting a fix on a woman who had proven she had all the makings of a dangerously addictive fix…for me.
Jesus fucking Christ. This wasn’t happening, couldn’t be happening, not here, not now, not with this woman. This was wrong, for the mission, for me. And yet this was also right, so right I couldn’t stop it, so pure and exquisite that it demolished the logic that usually ruled me, bulldozed right over my carefully constructed defenses and blew my shields into splinters.
I seized on her lips. I drank her up as if I had a right to flirt with pleasure and happiness. Good, so good. She tasted like chocolate and salted caramel, wholesome and true.
Her mouth responded to me, eager, passionate. Our tongues entwined in a mutual exploration that unleashed the storm within, joy and hope I thought I’d never feel again, and lust, a hunger so raw and violent that it roared through my veins and threatened to destroy not only my control, but my life as I knew it.
Images flashed in my mind, visual effects of the emotions jarring me. Jade, cool under fire. Solid. Reliable. True. Jade, calm, smart and composed as she confronted Kumbuyo. She hadn’t lost it once, not even when that son of a bitch went at her. She was as brave as they came, bold, daring, fearless. The memory of her standing half-naked under the moonlight had me throbbing with need. She was a woman built for a warrior, a warrior worth fighting for; a goddess who’d stepped out of some ancient African legend to right my fucked-up world.
But I couldn’t endanger my mission and I couldn’t betray all that had been entrusted to me. I was trained for duty, which meant I had to pull out of this catastrophic trajectory, now.
It was hard, maybe even impossible. I was trapped in the feel of her mouth. I forced myself to think rationally. This was Jade Romo for Christ’s sake, the woman who had the potential to out me and destroy everything I’d built, including the reserve. While she was here, she was also my responsibility. Another thought hit me, one that killed the joy in me. She’d been seconds away from being raped and moments away from being killed. If something had happened to her under my watch, I’d never forgive myself.
How I ripped my mouth away from hers, I’ll never know. It took all my willpower. My senses reeled. When her eyelids lifted, her eyes glittered with questions and her hand hovered over her mouth, as if her lips stung as much as mine did.
“No, negative, we’re not doing this,” I muttered, mostly to myself. “We can’t. We won’t.”

Other Books in the Wounded Warrior series:

Anna del Mar’s explosive, sexy debut novel in the Wounded Warrior series, perfect for fans of Lisa Marie Rice and Lora Leigh—the story of a woman desperate to escape her dangerous past and the navy SEAL who would lay down his life to save her.

Ash Hunter knows what it is to run. A SEAL gravely injured in Afghanistan, he’s gone AWOL from the military hospital. Physically and mentally scarred, he returns home to his grandmother’s isolated cottage—and finds a beautiful, haunted stranger inside.

Lia Stewart’s in hiding from the cartel she barely escaped alive, holed up in this small Rocky Mountain town. Surviving, but only just. Helping the wounded warrior on her doorstep is the right thing to do…it’s loving him that might get them both killed.

Soon, Ash realizes he’s not the only one tormented by the past. Pushing the limits of his broken body, testing the boundaries of her shattered soul, he’ll protect Lia until his last breath.

Ex-military pilot Seth Erickson is fighting his own demons, but when he finds Summer Silva, a beautiful, warmth-loving, Miami woman stranded in the frozen wilderness, he’ll do everything in his power to keep her safe from murder, treason, and the ruthless Alaskan winter.

When a mysterious stranger is your only hope…

The scars of the past have left their mark, both physical and emotional, on former military pilot Seth Erickson. Off-grid in the far reaches of the bitter Alaskan wilderness, he wants only to be left alone with his ghosts. But he can't ignore a woman in need—beautiful, stranded and nearly frozen with fear.

Summer Silva never imagined that the search for her missing sister would leave her abandoned on a wintry back road, barely escaping with her life from a cold-blooded killer for hire. Now, hiding out in the isolated cabin of the secretive wounded warrior who saved her, Summer knows she must do what she fears most. Putting her trust in a stranger is all she has left.

All defenses are down

After a fiery first night together, Seth and Summer are bound by a need as powerful as a Bering Sea superstorm—and vulnerable to enemies just as fierce. For Seth, reawakened by desire, there is no sacrifice too great, no memory too dark, to keep Summer safe. But murder and treason lurk everywhere and Summer may not survive Alaska's ruthless winter.

Amazon Bestselling author Anna del Mar writes hot, smart romances that soothe the soul, challenge the mind, and satisfy the heart. Her stories focus on strong heroines struggling to find their place in the world and the brave, sexy, kickass heroes who defy their limits to protect the women they love. A Georgetown University graduate, Anna enjoys traveling, hiking, skiing, and the sea. Writing is her addiction, her drug of choice, and what she wants to do all the time. The extraordinary men and women she met during her years as a Navy wife inspire the fabulous heroes and heroines at the center of her stories. When she stays put—which doesn’t happen very often—she splits her time between Colorado and Florida, where she lives with her indulgent husband and a very opinionated cat.

Hi Fiona! I stopped by to thank you so much for featuring The Guardian on your blog. Have a wonderful weekend.