Blog tour - My Next Breath by Shannon McKenna

A relentless rebel supersoldier must seduce a mysterious beauty in his quest to rescue his brother, but gets more than he bargained for when their passion rages out of control… and releases a monstrous killer hellbent on their destruction...
Rafflecopter for My Next Breath Blog Tour Giveaway:

About My Next Breath: 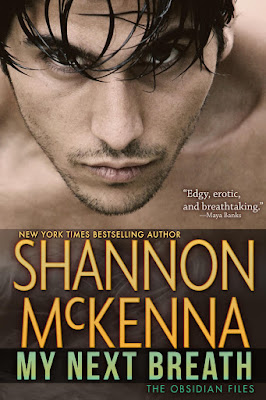 Zade Ryan. Rebel supersoldier. Nearly superhuman. On a desperate quest to rescue his missing brother Luke by any means possible. To do it, he must seduce the elusive Simone Brightman, inventor of the ingenious and deadly tech used to capture Luke and hold him prisoner, location unknown. Zade will do whatever it takes to get close to Simone. Her mysterious beauty and highly sexual allure have him at a disadvantage, but time is running out . . .

Simone is fighting battles of her own, on her own. Until Zade—six foot four of sinewy muscle and lethal combat skills—rescues her from street thugs and leaves her breathless. His smoldering black eyes and overpowering sensuality—and his seductive invitation to spend one wild, unforgettable night with him—prove too tempting to resist. Their passionate encounter unleashes scorching desire that neither can control—leaving them vulnerable to their enemies who watch from the shadows and wait. And when they are lured into a trap by a monstrous killer hellbent on their destruction, they must fight with every weapon they have to save Luke, and each other.

Because one night together could never be enough—and they might not live to have another . . .

An excerpt from MY NEXT BREATH
Copyright © Shannon McKenna 2017

Less than a block away now. He was already getting a whiff of her. Warm, female smells. He seriously dug that honeysuckle shampoo. Couldn’t wait to sniff it at close range.

He stepped out of the shadow of the awning. Raised his hand to signal the men waiting down the street. One raised his hand in response. They were ready. She was an easy target, parking an almost new Audi on a badly lit street like this.

His heart raced as his augmented sensory processor kicked into high gear, as if revving for combat. Which was overkill. He didn’t need an ASP jolt for this. The Obsidian researchers had wired him and rewired him during the Midlands experiments on their quest to produce the ultimate, relentless war machine. The data that speed-scrolled over his field of vision whenever he was stressed was a constant reminder of how they’d changed him. Permanently.

But he ignored it. He’d stolen himself back. He and all the rest of the Midlanders. He was more than what Obsidian had tried to make of him. Fuck them all.

Tonight—for her—he needed to be funny, smart and unthreatening, for starters. And good in bed, if he got lucky. Past experience suggested that he would. It was bad form to get cocky about it, but whatever. A guy could hope.

In fact, he quivered with hope. Watching Simone for two whole months had kept him perpetually half-hard. It wasn’t like she was doing anything sexy. On the contrary. She mostly just sat there on the bed, cross-legged in a thick snarl of wires and cables, surrounded by screens, dressed in leggings and a sweatshirt. Braless. Eyes narrowed with ferocious concentration as she typed so fast and hard the detached wireless keyboard bounced against the mattress.

He was in a groove with surveillance monitoring. Forget sleep. Pill-induced or natural, it wasn’t happening while he was watching that woman. And after their escape from Obsidian’s research facility at Midlands, he’d sworn never to inflict sentinel sleep on himself again. Constant vigilance turned the strongest into short-circuited robots. It didn’t matter how skillful he was at alternating his brain hemispheres, resting one while using the other and blah-blah-di-fucking-blah.

He was good at it, yeah. And so? He was good at a metric fuckton of unspeakable things. That didn’t mean he would ever do them again.

But he’d do any number of unspeakable things for a chance to know what happened to his brother. Watching Brightman prance around in her underwear was no chore. She was so damn pretty it just turned his head around.

She was almost upon him. His ASP processor sent a fire-hose of data scrolling wildly up both sides of his field of vision. His senses sharpened to a level beyond painful. He hadn’t expected this. Bullshit timing.

Her footsteps echoed in his ears, boom-scrape-squeak. Her soft breathing, the quick and steady drum of her heart. He smelled the warm mix of her hand lotion, her wool coat, the leather of her boots, the swish of her long skirt, the brush of the tights between her thighs. He smelled the coffee she’d had not long ago and a hint of the vanilla flavored creamer she’d lightened it with. Whiffs of the perfume she used to wear back in her corporate days wafted out of her purse like little ghosts.

He also smelled the festering mouth-breathers who waited across the street.

His heart thudded loudly. In a few seconds he’d see Simone in the flesh. The mysterious ex-fianceé of Noah Gallagher, Zade’s friend and fellow Midlander rebel.

A woman who might or might not hold the key to the last possible clue that could lead him to his brother.

Or to his brother’s bones.

That thought stabbed through him like a thin blade of ice just as Simone Brightman rounded the corner and hit his line of vision.

Shannon McKenna is the NYT bestselling author of sixteen action packed, turbocharged romantic thrillers, among which are the stories of the wildly popular McCloud series and the brand new paranormal series, The Obsidian Files. She loves tough and heroic alpha males, heroines with the brains and guts to match them, villains who challenge them to their utmost, adventure, scorching sensuality, and most of all, the redemptive power of true love. Since she was small she has loved abandoning herself to the magic of a good book, and her fond childhood fantasy was that writing would be just like that, but with the added benefit of being able to take credit for the story at the end. Alas, the alchemy of writing turned out to be messier than she'd ever dreamed. But what the hell, she loves it anyway, and hopes that readers enjoy the results of her alchemical experiments. She loves to hear from her readers.