When a pin-up worthy tattoo artist meets a car mechanic on a Florida roadside, it feels like the start of a great one-night stand. But when feelings grow, and secrets are revealed, both of their lives will be at risk. The only question is from who? Find out in THE DARKEST LINK by RITA finalist, Scarlett Cole.

Follow the blog tour from August 29th - September 9th! Two grand prize winners will receive a $25 Amazon Gift Card and the runner-up prize will be all four ebooks in the series.

Visit all the stops for more chances to win! 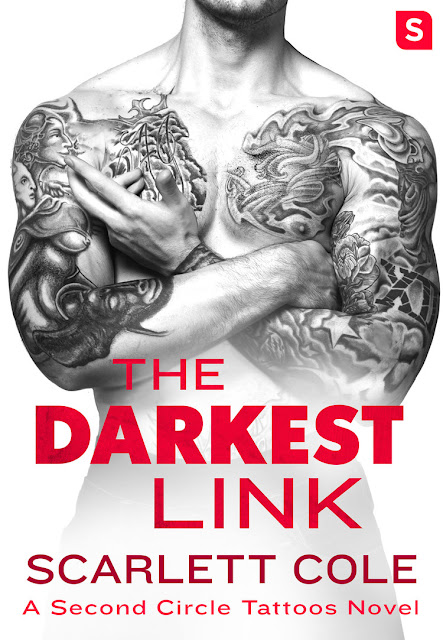 When her car breaks down off the side of a lonely highway far from her sunny Miami home, tattoo artist Lia never expected her very own white knight to ride up on the back of a barely street-legal motorcycle...and she never expected to fall for her dark savior. After a string of failed relationships and a bruised heart Lia is not looking for forever, and the hot mechanic, with his sexy scruff and shaggy hair, is simply impossible to resist. He's the perfect candidate for a mind-blowingly-perfect, no-strings-attached one-night stand.

Reid left his life in Chicago far behind him and hasn't been back, but he's never been able to escape the guilt he feels about his own painful role in inviting a monster into his baby sister's life. A monster who almost destroyed her. Being with Lia is an unexpected gift, one he doesn't feel he deserves, and their one night together has him wanting more than he should. When he surprises her at her tattoo studio, Second Circle Tattoos, in Miami, he's in for a shock—and a fist to the face—when his past and present collide.

With secrets coming to the surface, Reid and Lia are thrown into a world of betrayal and lies that threatens to pull them under, and the last link to his former life may be the darkest of them all.

Check out the other books in the Second Circle Tattoos series!

Excerpt from THE DARKEST LINK:

“What is this?” she asked, running her hand over the elongated hood.
“A 1958 Ford Thunderbird. It was a shell when I bought it. Was found in an unused barn with a bunch of other old classics.”
The wheels were black with white faces, and the soft top was a creamy white. Reflections from the chrome cast light onto the white walls.
“I love it,” she said, excited to sit inside.
“Hood up or down?” Kenny asked, slipping her cases into the trunk.
“Oh, most definitely down,” Lia said. Screw the victory rolls, she could always put her hair into a high ponytail and add the red ribbon she had in her purse if her scarf failed. She reached into her bag to find it and tied it around her head.>
“I like this,” Kenny said, fingering the knot under her chin gently. The way his eyes crinkled at the corners made her feel all kinds of gooey inside. Perhaps it was a good thing they lived a long drive away from each other. His very presence made it difficult to remember why she was taking some time off from men. But a little harmless flirtation was adding to the adventure of a few days off work. There couldn’t be any harm in that.
Once inside the car, Kenny took her hotel details and plugged them into his phone. “There are few downsides to the classics, but lack of sat-nav has to be one,” he said, turning the radio on. “Ready?”
“I feel like Thelma and Louise about to drive over the edge of the cliff,” she said with a laugh.
“Close. That was a 1966 Ford Thunderbird, eight years younger than this baby. Does that make me J.D.?”
“That depends. Are you planning on driving me to a motel, having your wicked way with me on the dresser, then stealing my life savings?”
“I know a motel, don’t know if they have a dresser, but more than willing to do a drive-by to find out.”
Lia laughed. “I was joking.”
“I wasn’t. Say the word, Red.”
He revved the engine several times, the low growl sexy as all hell, and grinned as he roared out onto the street. Lia watched his hand as he shifted the stick. He caressed the gear stick. The more she stared, the more turned on she became until she had to cross her legs and look out of the window.
Damn him for getting her so hot and bothered. She spared a glance back toward him, just as he turned to face her. And he winked. Because he knew.
And that just turned her on even more.

Scarlett Cole is a writer of contemporary romance and a two-time RITA finalist. Her debut, THE STRONGEST STEEL, has already become an Amazon best seller in romantic suspense, was a Best Debut Goodreads Author Finalist 2015, and Authors On The Air Global Radio Network Contemporary Romance Pick of 2015.

Having travelled the world for work and fun, Scarlett is a citizen of both Britain and Canada. A true city-dweller, she considers Toronto and Manchester home and likes to set her books in vibrant locations such as Miami and Los Angeles.
Rep'd by Beth Phelan at The Bent Agency, and published by St. Martin's Press.
She'd love to hear from you on twitter @itsscarlettcole
Connect with Scarlett: Website | Facebook | Instagram | Twitter
Posted by Fiona at 12:00:00