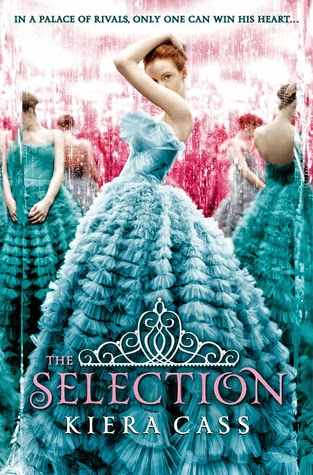 It’s the chance of a lifetime and 17-year-old America Singer should feel lucky. She has been chosen for The Selection, a reality TV lottery in which the special few compete for gorgeous Prince Maxon's love.

Swept up in a world of elaborate gowns, glittering jewels and decadent feasts, America is living a new and glamorous life. And the prince takes a special interest in her, much to the outrage of the others.

Rivalry within The Selection is fierce and not all of the girls are prepared to play by the rules. But what they don’t know is that America has a secret – one which could throw the whole competition… and change her life forever.

I loved The Selection.
I don't care what the other reviewers say, but this book is near perfection for me.

America Singer comes from a poor family from the caste of Fives.
She received a letter inviting her to apply for the Selection, in which a girl from each Province will be sent to the Palace as a potential wife for the crown prince Maxon of Illéa.

The entire Selection will be aired on TV and as you can imagine America was very reluctant to apply. Her mom pesters her about it everyday and even bribed her to sign up. She has a secret boyfriend who's a Six and he managed to persuade her to enter her name into the lottery too.

She did enter in the end and she was selected to represent her Province in the Selection. So off she went to the Palace to meet the other 34 girls. As expected, the competition was very fierce with some particularly bad characters trying to sabotage everyone else's chances with Maxon.

At the end of the book, Maxon had to narrow down to the Elite few. There was supposed to be the top 10 girls who would be the Elite but Maxon made the difficult decision to only pick out 6 girls, America included.

We will find out what happens during the next round as the top 6 battle out in book #2 The Elite.

Goodreads link to The Selection